Secure your factories , offices and even homes with this  Pepper Spray Industrial Slave Unit. This alarm will fight back immediately.

To begin with the Pepper Gas Slave Unit – Slave units can come with or  without battery back-up
They can be connected to some existing alarm systems
You can connect the slave to the master unit as a slave
Easily installed (DIY)
Please note that Slave Units do not come with passives.

Passives can be added on at an additional cost.

Only pet friendly passives are used.

A door magnet can be installed at the main entrance being used for entry/exit.

This will allow a time delay, if the unit has not been deactivated on entry.

Allowing time for the unit to be deactivated before spraying.

Two passives can be installed, wired in parallel, to alleviate false triggering

(both passives need to detect movement simultaneously to trigger the unit.)

This application is widely used in factories (cats and rats etc.)

A time delay can be added to the initial arming of the unit.

Giving time to deactivate the system in case of accidental arming of the remote control.

A red LED will indicate that the unit is either armed or disarmed.

It will fill the area the unit is protecting with a highly repulsive and irritating pepper gas.

Stopping theft while the police and armed guards respond.

A standard unit will spray for five seconds of activation.

Which will give the unit approximately six separate sprays from a single canister.

And has a shelf life of four years.

When the unit has sprayed six times (on standard spray time).

The sound bomb will sound eight beeps every time the unit is armed with the remote.

Thereafter, the unit will beep once at random intervals to warn that the unit needs to be serviced.

And that the gas canister needs to be replaced.

After activation the unit rearms itself after three minutes.

To arm and disarm the unit

Once armed, a red LED will illuminate indicating that the unit is in the armed mode.

A green LED indicates that the unit is charging the battery.

To arm and disarm by remote control is immediate, unless a time delay has been used.

(With a time delay, if the remote button has been pressed by accident, the unit will count down for approximately 10 seconds, giving a warning that the unit is about to arm.)

A time delay of fourteen seconds is used on the entry/exit door with an audible alarm to warn that the unit is still armed. No time delays are on the passive.

If, on entering the building the red LED is flashing, an activation has occurred.

Therefore, enter with care! On rearming the unit, the flashing LED will automatically reset.

A passive is mounted to the unit, which will detect any movement in the designated area activating the unit.

On activation a siren will sound for five seconds or three minutes, depending on the customer’s requirements

And can be connected to the pepper gas alarm for larger areas.

Or connected directly to an existing burglar alarm with a constant twelve-volt output.

Up to 2 slave units can be connected to a master unit with a passive per slave unit.

Upon detection of an intruder the master unit and all slave units will activate simultaneously.

Beams, door magnets and hard wire or remote panic buttons can also be connected to the unit.

The panic button activates a siren only.

Consequently, no pepper gas is sprayed.

The pepper gas used is a totally natural mixture, made up of different peppers.

(15% capsicum) which is non-lethal to humans.

The gas is non lethal.

The gas is used by some local law enforcement agencies as a hand held spray.

Optional extras are the SMS communicator, which can be used in conjunction with the unit.

The SMS communicator will also send an SMS notifying you that the unit has been activated / de-activated or if there has been a burglary as well as power loss to the unit. 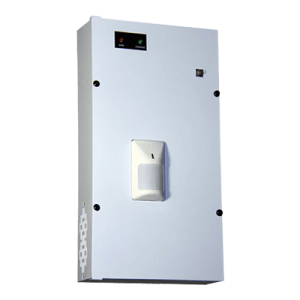